Tornado’s were all over the Dallas and Fort Worth area today.  Arlington, Lancaster and Forney were hit pretty hard.  My brother and co-workers took a video of a tornado close to them.

I haven’t figured out how to link the video’s on here yet.  This took my breath away, partially because nature in all of its wonder has the ability to be beautiful and serene or deadly at times.  Either way, it’s a reminder that we are not in control of anything really.   We are just human after all and witnesses of events on this journey.

I am thankful that though there is devastation and loss in all this, there has also been divine protection.  Let us lend a helping hand where needed, listen to needs, and step in where we can to help. 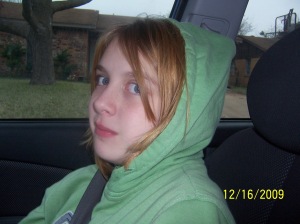 Shyness – often misunderstood, can be crippling to some and mocked by those who are not afflicted.

Sometimes being shy is simply the discomfort or difficulty of not knowing what to say in different social environments or situations.  In some cases, this can be devastating for the sufferer leading them to feel out-of-place, seem boring, appear snobbish, or odd, which only alienates them further from the group.

I struggled for years with being shy and timid, so much that I was nicknamed “Bambi” at a young age by the ladies in the quilting bee thought I was as timid as a deer, and would  startle and run at every unknown sound.  They weren’t far from the truth.  The moment anyone looked in my direction to ask me my opinion or pull me up in front of other people, I would dart out a side door before they got the words out of their mouth.

I am still shy in many ways.  I am the person that will seemingly appear out of nowhere at a gathering because I avoided the grand entrance, then will walk around a room until I find a conversation that I can contribute too.  Oddly, it’s not a matter of meeting new people, it’s a comfort zone thing with me.  As long as I have people with common interests, even if it’s just a few, then I’m good even in a room full of complete strangers.

My mom sought to “cure” me of shyness as I was growing up.  I was forced to sing on stage many Sundays.  If I hesitated the song director had applying guilt down to an art form and when he realized it worked so well on me, would then call on me on short notice to crawl up on stage and torture another song to death.  I HATED singing up on stage.  Finally, I gave it up and refused.  Okay, no, I left and went to another church where I could sit in the back row and people didn’t know me, ha, showed them!

Often shy people are shy for a reason.  The introverted person may have been through a traumatic event, or experienced physical or mental abuse, witnessed something unpleasant, or maybe they just have a somewhat withdrawn personality.  No need to pull them to the forefront and try to make them give a speech.  They don’t want to be singled out and pointed at either.  Many times it’s the quiet one’s that are the artists and writers in the group.  They are intently listening to what’s being said; while their mind is running at a rapid pace thinking of all the creative twists and turns of something they are working on.

So have a heart for the shy or quiet people out there.  Don’t just assume that they are aloof, snobs, arrogant, or deliberately ignoring you.  Though there are some people who act that way, it becomes obvious after a short while who is who if you give them a chance.  Some of my best friends are the shyest people in the room at gatherings.  Give them a chance, let them gain their footing and get in their comfort zone and you may be surprised how the personality will bloom.  Everyone has their own part to play, we all matter.